Skip to content
In some of the pictures of Nejat I have seen in the media, there is a light in his face that I didn’t see when he was sitting at the table working through his translations, or when he was looking at the sea.  We lived together on an island, but he never went swimming.
Sometimes, when a cool breeze would blow in our window, he would say it wasn’t a very nice day, that the weather was really bad. Man, I got on him for wasting vegetables: I binned tiers of zucchini and peppers; couldn’t grasp how he could not eat the ones he’d purchased before buying new ones
and lastly, undoubtedly most memorably, I returned to our house one evening to find a halved kitten on our doorstep, the head half, it looked like it was sleeping, its mother crunching its bones.
He can’t know, I thought, and be home not doing anything about this. Zombied straight up the stairs to his room without removing my boots, I don’t want to know what my face must have looked like,
and he was there, propped up in his small bed, on his laptop, not registering what I was telling him about the kitten, sympathetically looking like he wished I’d go away, so I scooped it myself into the shoebox I had also used as its crib, and my neighbor said kolay gelsin.
At the time I thought what could be more important than removing half of a kitten from your doorstep, but I think I get it now, or at least I am starting to.
Do you know how brave you would have to be, do you know how much fucking courage it would take to fight ISIS?  To know your death was likely? To do it anyway? To plan it?
It isn’t worth getting in fights with the neighbors. Smoke a cigarette if you want to or not. It’s about more than the weather, or swimming, or the damn zucchini. It’s about more than even <gasp> than the kitten.
His close friends said that he would always think about how another world was possible. He was focused on, and died in, his fight for it. And I guess I, still in this one, just miss him. 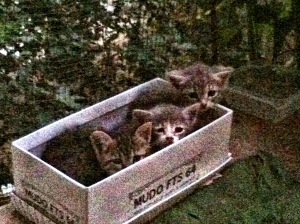