Spent our first full morning on the Spit walking through honeysuckle-smelling pine forests which reminded me of the grasshoppers bounding around my great-grandmother’s farm in Princeton, Wisconsin.

Lunched on canned curry and rice left over from our dinner the night before and, after a quick snooze at the end of which a baby came and sat down by us, borrowed bicycles and rode the same paths we had walked earlier to a place to watch the sea that made me realize why the Curonian Spit is a sought-after destination.

Twenty-five minutes by bus up the Spit, a kind of paradise awaited us in Rybachy: we found a beautifully restored German guesthouse (read: at least twelve foot high ceilings) in quiet, serene surroundings full of irises, peonies and daisies – a welcome change indeed after the first place which had a few issues with overcrowding and plumbing.

After a picnic lunch (sardines and bread) on the “quiet” side of the Spit (the ocean and bay sides are only about two miles apart for the Spit’s whole ninety miles) we went out for dinner, called both our moms, and organized the next two days: sea, Lithuania. 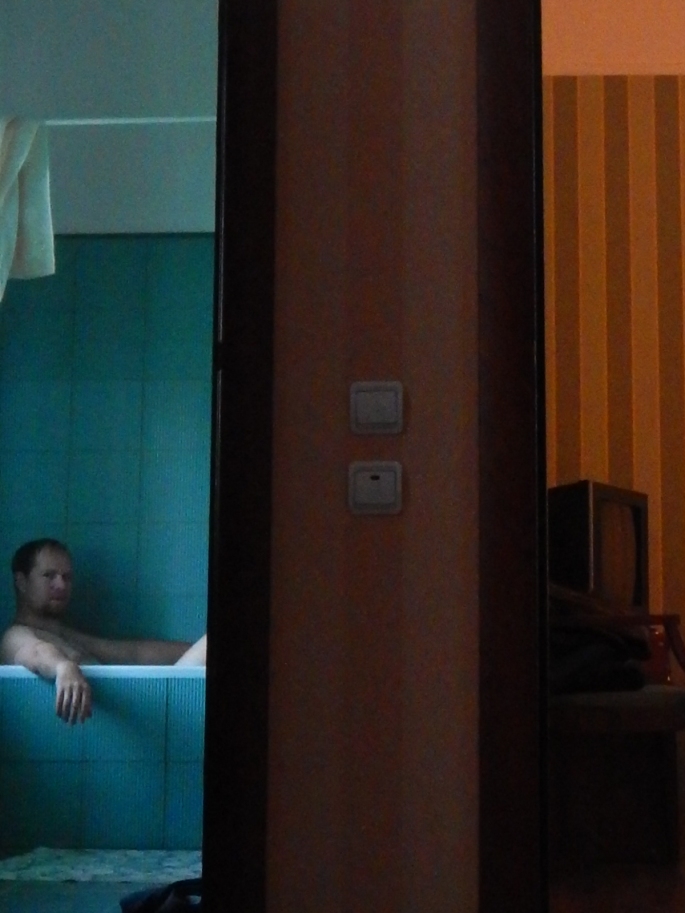 On our full day in Rybachy we read for about an hour and a half after having breakfast outside and then went to the beach and lounged in the dunes.

Believe it or not before lounging we ate sardines and bread again! I love this lunch and hold it dear partly because when I first met this husband of mine and we were traveling by bus through Mali which would stop for 10 – 15 minutes, I would run off to find a bathroom and return to find him just out of the exhaust fumes of the bus but close enough we’d be able to catch it if it tried to leave us, with this snack.

We are so far north that the sun rises before four (which is what time I have been waking up), but I was still sleeping at six when he woke me up to go stand on the side of the road and wait for someone driving to Lithuania (buses only cross that border in the evening).

No sooner had I arranged a nice seat on the side of the road when, in succession appeared Jake with a piece of cardboard he’d fished out of the dumpster on which he’d penned “LT” (Lithuania) and – in a black 2012 Audi with double sunroofs – Damjan, who “likes to do nice things for people if he can” (or so he told us after waiting for us to get questioned at the border again on the way out).

Lithuania is quite a bit different feeling than Russia – in Nida, we are back on the euro, for one thing, so everything is more expensive, there are a lot more tourists, and everything is much easier, but we also aren’t looked upon with the same general bemusement the way we were in Russia.

Jake did help me see that one can appreciate visiting/holidaying/living in an EU country in a different way after spending some time in Russia: besides maybe China, it (Russia) is the one place outside the US’ sphere of influence; it makes one recognize how one should answer for oneself should there be no ‘state’ protection (to be fair, how much is there anyway?).